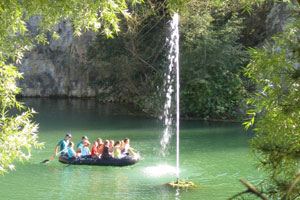 Now finally the decision has been made: the 17 Odenwald communities of the Neckar-Odenwald district will be included in the area of the Geopark Odenwald. Furthermore the stalactite cave of Eberstadt will become one of only five entrance gates to the Geopark. According to Dr. Achim Brötel, the former mayor of Buchen, the open-air museum Odenwald in Gottersdorf will also be provided with an information centre and Mudau will become the headquarter of the Geopark rangers.

The actual decision has already been reached on the 1st of November 2004 in Sicily in the course of a meeting of the network of European Geoparks. This decision is going to be crucial for the ongoing tourist development of the whole area. It has been announced by the chairman of the board of trustees of the wildlife park Bergstraße-Odenwald, District Administrator Matthias Wilkes, on the occasion of the general meeting on the 3rd of December 2004. As representatives of the town Buchen the former mayor Dr. Achim Brötel and his deputy Dr. Wolfgang Hauck attended the meeting.

With this admission into the Geopark Odenwald a long anticipated dream has come true. Especially the towns Buchen and Walldürn have collaborated strongly for the realisation of this plan.

The network of European Geoparks has designated the stalactite cave of Eberstadt to be one of only five so-called entrance gates in the Odenwald Geopark; with its more than 70 000 annual visitors it constitutes one of the biggest tourist attractions in the south-eastern Odenwald. Thus Buchen holds a key position in the Geopark district. All of these entrance gates function as important visitor attractions at the edges of the Geopark area. At these gates the attention of the numerous visitors will be drawn to the Geopark. The aim is to arouse their interest in the variety of Geopark offers and to then direct them to the subsequent Info Centres and discovery areas.

The other entrance gates are the monastery Lorsch, a World Heritage Site, in the West, the castle Lichtenberg and the Roman museum Obernburg in the North and the towns of Heidelberg and Neckarsteinach in the South. Buchen will from now on form the centre of the Geopark discovery area “Transition from variegated sandstone to lacustrine limestone”. The two main focuses planned for this discovery area will mainly be orientated towards geosciences, cultural history and folklore. These topics are called “Caves and Dolinas” and “Life in the Madonnenländchen (Madonna country)”. Even before the application, two inter-communal specialist teams have been established to facilitate the coordination of these focus points, Buchen being in charge of the former topic and Walldürn of the latter.

Dr. Horst Eichler from Heidelberg has compiled an extensive report called “Geopark project ‘Madonnenländchen’ – status, aims, background and realisation proposals” in close cooperation with these specialist teams. Two aspects will be quoted in detail below to exemplify the regional relation of the geoscientific and cultural-historic topics.

The central project area consists of the whole of the local subdistrict of the towns Buchen and Walldürn. This area presents an extremely varied and therefore geological and geomorphological interesting portion of the southwest German layered landscape (also referred to as southwest German massif by W. Garle). One area of interest is the biogeographic setting, the land terrace of the upper variegated sandstone with its transition to the highly karstified layered landscape of the lacustrine limestone. Another focus point is the superimposition of the cultivated landscape. The area mentioned here is an almost ideal example of a transitory landscape in between the low mountain range of the Odenwald sandstone plateau (area of more recent settlements) and the western and more central site of the southwest German Gäu-area (area of historic settlements). While the former has low agrarian potential and its population has therefore taken place rather late, the latter offers the ideal climatic and edaphic characteristics that have facilitated an early settlement.

For the objective of the Geopark and its upcoming valorisation the following localities are available: natural and cultural localities (such as the stalactite cave Eberstadt and the open air museum which are classified as high quality discovery areas) which are particularly valuable and interesting due to their scientific, cultural-historic and touristy characteristics. Other relevant areas include smaller rural units with comparatively less relief variety as compared to the Odenwald region that borders the Rhine trench.

The elaboration of these topics is by now very advanced. In collaboration with the academy for environmental protection, the basic course of action for the development and the realisation of a tourism concept focused on the preservation of nature has been devised. It was presented to a broad audience for the first time at a symposium in Buchen on the 6th of October. The locals have also already had a chance to receive information on the overall concept for the discovery area in various talks. The next step is going to be the further education of the Eberstadt stalactite cave guides. In cooperation with the Geopark office and the pedagogic college in Heidelberg they will receive training for the job as local Geopark guides. This course will start on the 18th of December and take place on five consecutive Saturdays. 40 applications for this training have already been submitted. The extensive annual program consisting of a variety of activities and speeches has been published online in the activities calendar and the Geopark event folder.