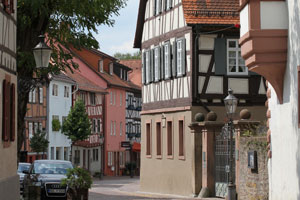 The Regional Museum Buchen is housed in two building of the former electoral wine cellars of Mainz, the “Steinerner Bau” (‘stony building’) (1493) and the “Trunzerhaus”. The board of trustees was founded in 1911 and the exhibition spaces in the “Steinernen Bau” were established in 1915 and 1929, and in 1986 in the “Trunzerhaus”. The museum possesses one of the most comprehensive folkloristic collections in the Baden part of Franconia.

In the “Steinernen Bau”, the exhibition consists of tastefully furnished peasant and middle-class parlours, including some interesting “Baier-cabinets”, which are characteristic for the Odenwald region. Furthermore clothes, the traditional Odenwald costumes, and a toy collection are on display.

On the first floor of the “Trunzerhaus”, the Joseph-Martin-Kraus memorial has been set up. On display are personal mementos from Joseph-Martin-Kraus (1756 – 1792), such as his golden pocket-watch and his uniform, examples of his compositions, paintings, letters and more, as well as contemporary furnishings. There is also a special space, where his compositions can be listened to. Visitors can enjoy excerpts from his music, and early as well as first editions of the private music collection Vleugel provide an ideal addition.

The second floor houses an exhibition space dedicated to the subject of Buchen’s crafts and guilds – carpenters, coopers, locksmiths, blacksmiths, shoemakers, tanners, tailors, bakers, and hairdresser. Another exhibition room shows exhibits from the studio of Buchen’s first photographer, Karl Weiß (1876 – 1956). Original parts of his studio furnishings have been preserved, as well as cameras and magnifying machines.

Direct link to the homepage of the Regional Museum Buchen: Bezirksmuseum