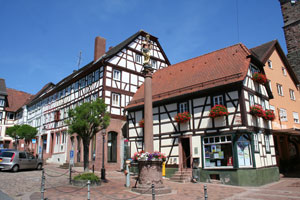 Buchen is located in the north of Baden-Württemberg. The cities of Heidelberg and Würzburg are about 65 kilometres away.It takes about one and a half hour to drive to Stuttgart or Frankfurt.

Inspite of its 1200 years of history, this romantic little town has remained young in its heart. Seven centuries ago the municipality was given the status of a town. Today Buchen with its various private and municipal institutions fulfils important functions for the Neckar-Odenwald district.

Geologically Buchen is exactly on the boundary between Odenwald and Bauland, which is separating the areas of the red sandsone and the area of the white shell lime stone. In the low mountain range of the Odenwald, you can find marvellous valleys covered with pastures and flowers as well as murmuring creeks and woody hills. In the Bauland area the eye can roam far over the hills of a friendly and charming agricultural countryside, where the Grünkern, a special sort of wheat, comes from.

With its pedestrian precinct, the beautiful Old City Hall, the pretty studding houses, the museum area, the bubbling fountains, the aspiring Catholic parish church and the parts of the mediaeval city walls, the centre of Buchen is a witness of an honourable past. In the 20th century the town extended its area beyond its historic centre to generously planned districts with new houses, thus combining harmony, tradition and progress within its walls.